Until I See You Again 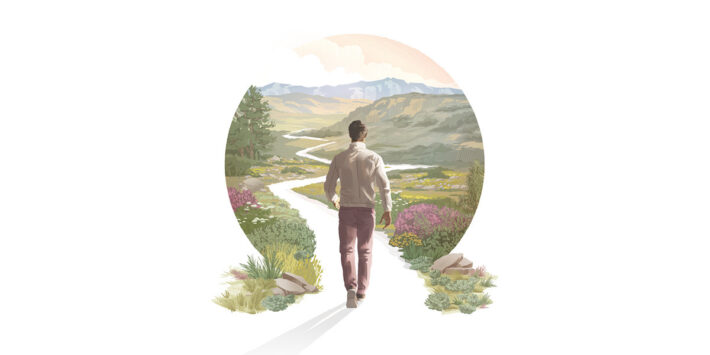 The spinning wheels created mesmerising patterns from the clinking plastic beads attached to the rims. An unappreciated relic of the past, powered by pedals, but it allowed a freedom of movement for a relatively unnoticeable journey through the forest.
Descending down the bank, the rising hot asphalt air was broken by a cool breeze that flowed over the bare skin of my arms and gave life to my loose hair, the gentle spring sun heating up my clothes against my back.
He descended slightly faster due to the weight of his bike, gravity becoming an ally in the race to our spot, encouraging me to keep up more eagerly.
He might have been older than me, but that could rarely be felt, still so full of vigour and endurance in both mind and body. His hands firmly on the handlebars told that story, big and robust, fully capable of hard physical labour every morning at dawn as he had been doing faithfully for many decades, even through illness and pain. His dirty overalls were torn and patched by a mix of duct tape and silicone, a testimony of his philosophy of functionality over beauty, embellished with a pair of old leather clogs and glasses of unspecified strength looking like they were about to dive out of his front pocket in an attempt for freedom. I couldn't help chuckle every time his trusted work pants would be adorned by a newly repaired hole.
We left the main road and turned in on a small path that led us into the forest. The local wildlife barely flinched, beyond a twitching ear to pinpoint our location as we quietly cruised by on a small uneven path, man-made by all those who walked this route through the years, smoothly twisting in between the trees.
He got off his bike elegantly, swinging his leg over the seat and balanced on one pedal while continuously using its momentum onwards until he gently stepped off and parked the bike at a rough barked tree, while I stumbled off like a puppy tripping over its own legs, yet to master its own motor skills.
Walking in the shadow of the tree crowns, cautious footsteps were dampened by the soft mossy floor, the silence barely broken by bony twigs cracking underfoot. The air was still and damp, the sun peeked through the rustling leaves above, revealing the gorgeous contrast between newly bloomed spring leaves and clear blue sky. The season of revival that would ward off any sadness conjured by the darkness of winter.
I laid my tiny hand in his oversized grasp, his hands were always so cold despite the warm weather or hard work he involved himself in. I raised my eyes and looked up at him, let a grin widen from ear to ear, a compulsion brought forth by the beauty of our natural surroundings. He closed his sunken narrow eyes, hidden beneath his bushy eyebrows, rough hairs so long they could easily poke his eyes, although it never seemed to happen. He smiled, squeezing my hand gently, affirming his contentment.
While drawing inspiration from the environment, he told me a story as we walked along, a story of an ancient Ruler who was plagued by a series of disturbing dreams. A particular dream entailed an exceedingly large tree, cut down, the stump bound with rings of iron and copper to prevent it from growing. It was easy to paint a magnificent picture of a once delicate sapling as the ones reaching for the sky from the forest floor we were avoiding to trample down, resting in the shadows of the majestic trees they would attempt to grow into, if nature allowed it.
Hours passed wandering by his side, listening to his tales, told with passion, interpreted with certainty, and I was enthralled by how he could remember so much. I didn't mind the fact that I had heard these stories numerous times before, at any opportunity presented to him, and he never misplaced even the most miniscule detail. His eagerness was contagious, his knowledge seemingly endless and his deep voice, occasionally interrupted by a cheeky laugh, was as authoritative as it was kind.
"Remember this. It is of the utmost importance to know the Truth." he said with a warm smile and light in his eyes.
I nodded in acknowledgement, eager to show appreciation by listening intently to any wisdom he would be willing to share, to show interest in the one who had given me comfort and stability during a lifetime of turmoil, who had been a father when my own father had forsaken me, given me a home when I needed one.
We arrived home to be met by his beloved, warm and kind, dressed in her usual pleated skirt and apron, busy preparing dinner, the permeating fragrance delicious and homely. He walked up to her with a cheeky grin, hugged her and kissed her forehead.
I closed my eyes and in a hushed whisper, I promised that I would carry his knowledge with me.

I slowly opened my eyes, gently holding his hand by his bedside.
His face was peaceful and content, pain free, the usual furrowed brow had released its hold. I had lost a part of myself, a kindred spirit that had been extinguished and all I could comfort myself with was the fact that I had been there when his life force exhaled a final time and his pulse slowly diminished.

He is gone, preserved in the perfect memory of the Force, waiting in blissful peace alongside his love, until I see him again.