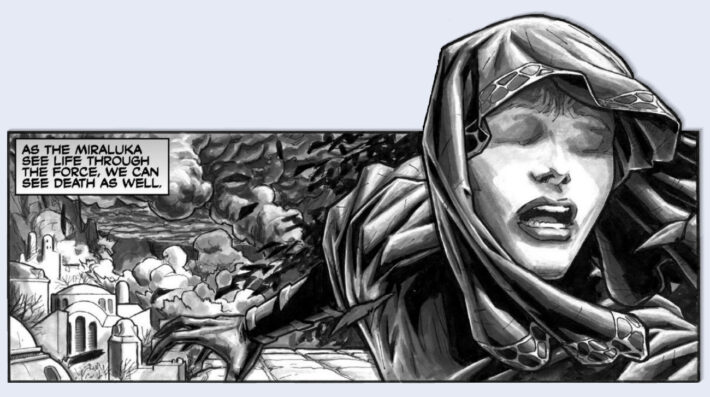 As the Miraluka see life through the Force, we can see death as well.

It came from the west - at first barely audible as a deep rumble, then loud and threatening. Darkness overtook the brightness of my people, advancing swiftly through every building, obliterating each being in its path. The devastating rumbling of houses collapsing was deafened by the screams. I could hear them all, I could feel each living being's flame snuffed out.
I wanted to run to them, to help them, but... I couldn't. I felt my pulse thumping in my throat. My heart beat so fast I felt as if my rib cage was about to burst. I struggled holding back the urge to throw up. My entire body trembled from my uncontrolled sobbing, my lungs starved for steady breaths.
Then everything fell silent, like standing under water, dampening the sounds of the destruction and chaos.
I just stood there. It felt like hours, although it was but a moment, looking at my home being ravaged, my friends and family swept away, trees stripped bare, animals frantically fleeing for their lives, but ultimately not even they could outrun the darkness.
Katarr was a beautiful and serene world. Why was this happening? I wanted to fall to my knees and cry.
A voice broke the silence. I couldn't understand what it was saying, where it came from. It felt like it was inside my skull, deep and penetrating. People were running, falling, stumbling. So many souls were fading, each one of them leaving behind a petrified scream of pain and fear... and regret? The echo grew louder and louder with each death suffered on the surface of my dying home. It almost felt as if that echo was manifesting itself in the pit of my stomach.
I wanted to help them. But I stood motionless, until I turned around and I ran.

I kept on running, pulling up my skirt so as not to trip on it. The thunderous storm was catching up to me, advancing rapidly. Like an enormous dianoga moving swiftly through murky waters, feeling its way with each tentacle, hunting for prey, grasping at anything and everything to catch. I knew I could not outrun it, but I had to try anyway. The trees and the bushes withered around me in exceeding speed, the lake was turning to sand, leaving fish gasping for air, flapping in desperation, until they also dried up at an accelerated speed, turning to dust that was swept up by the storm that continued to chase me. Birds were falling from the sky, grazing me as they came crashing to the ground, evaporating into ashes on impact. The roaring winds were pulling at my veil, while pushing me off my track. My world had been torn asunder.
I kept running and running. I was running so fast I could feel my legs giving in. The ground was becoming more and more unsteady to traverse, sinking in as my surroundings turned to gritty ashes, colorless and inhospitable. My muscles were burning, growing tired. I tripped and fell, absorbing the fall as much as physically possible with my hands. I heard my own cry of pain that screeched inside my ears, echoing the brutality of the disintegration of my home.
Pain.
The pain I suffered from my fall, the pain I suffered from being surrounded by death, the pain I suffered from my guilt.
I ran.
What was I supposed to do? Should I have stood my ground and perished with my loved ones? What should I have done?
It didn't matter anymore though. Strong winds were tucking and pushing me around as I sat weeping on the ground, waiting for it to devour and consume me.
I heard the voice again, whispers speaking inaudibly with a language I couldn't understand. Was it the sound of death?
I was on my knees, incapable of getting up, my body overwhelmed by agony. Panting in quick breaths, unable to inhale enough air, the winds eluded my desperate lungs. A gush knocked me over, howling at me and I did not resist. I let my face lie in the ashes of my people.

But then I felt it, the nothing approached, towering over me. It's presence was overwhelming. I looked up and a tall, menacing and dark figure adorned with a white mask stood in front of me, staring at me. He stood absolutely still in the ravaging storm, unmoved by it. His long robes were thrashing angrily in the wind, making his physical appearance even more ominous and intimidating. He looked down upon me, and despite the violent storm tucking at me, his gaze was fixated on me. He was staring into my soul.

And I was ready. Ready to become one with the void.

I'm cold. It's dark and eerily quiet. The deafening silence is only interrupted by the creaking of the hull, like the moanings of a dying beast.
My injuries have been healed, but this does not seem like a medical facility. There's no personnel or wailing of instruments and consoles - just emptiness.
All the viewports are shattered, its frames clutching onto shards of once magnificent engineer work, but I am not pulled into the vacuum of space.
Something is wrong. This has to be a ship, a large ship, a dreadnought maybe. It must be in orbit, the absence of sounds dominating throughout. A ship of this size has to have a crew, but I cannot see the crew or hear them. I reach out with the Force, but I can't sense anyone, not even droids.

Wait - I sense something. I sense him. He is here somewhere.

I am struggling with seeing anything. My species are blind, but we are not. The Force guides us, but it has abandoned me.
I manage to sit up and look down at my hands as I raise them to my face. My fingers slither up underneath my veil, my fingertips feeling their way up my cheeks and over the curve of my cheekbones.
The smoothness of my skin is interrupted by gaping wounds. What is that!? The flesh of my hollow eye sockets has been mutilated, cut open.
My heart starts pounding, my pulse throbbing, my breath quickening. I feel the muscles around my brow tensing, lips trembling. My nostrils flare with each breath - in and out, in and out, almost vibrating as I quietly whimper in the darkness, trying not to make a sound so as to not alert my captor.

Why did he do this to me? What does he want from me?

I have to get out of here. I swing my legs over the edge of the table I've been placed on, the coldness of the metal frame permeating my gloves and skirt. When I place my feet on the ground I reach out with the Force again, hoping my senses are playing a trick on me. But still nothing out there, except him.
The sound of every crackling footstep I take bounces back from the empty room, the smallest pebble crushed underneath my heel echoes for several seconds. The angry hissing of the doors opening startles me.
As I wander through the seemingly endless halls of the floating wreck, I sense him more strongly. He is waiting for me.
The groaning and creaking of the derelict ship is disturbing. Debris and crumbled metal are scattered all over the floor making my quiet traverse forward challenging. I am stopped in my tracks when my long dark skirt is caught on a sharp edge, fearing it to be the grasp of one of the long-dead soldiers strewn over one of the indiscriminate junk piles, his hand reaching out of the broken window towards the star-studded emptiness rather than his merciless end aboard this leviathan, his face imprinted by fear as a testament to the brutality of his fate.
I let out a sigh.
My heart continues to pounce in my chest, pulsating in my fingertips, my neck, in the open wounds of my sockets. The stillness of the desolate hallway makes the sound of my pulse even louder in my ears. I desperately take deep breaths in, hold them, then release, again and again.
Barely audible whispers emerge from every dark corner, streaking past me like will-o'-the-wisps trying to start a chase.
The sound of ripping fabric refocuses me back to where I am, at the belly of the beast. Will I be consumed like these soldiers?

His presence is growing stronger, more intense, its aura forcing itself into my very soul. Why has he brought me here?

I walk through the already opened doors to the devastated and deserted bridge, scarred from battles long past, as ravaged as my homeworld. He stands at the center, like a statue in the silence of space. Still and lifeless.
Terror has taken a firm grip on my body. Paralyzed, I feel warmth radiate from within, palms getting sweaty. I want to approach at the same time as I want to run away, like I did on Katarr.
I take one cautious step forward, then another.

I now stand behind him.

Imposingly tall, dressed in all black, his heavy garments flowing over nothingness. He is a man, and he is not. His mask obscures that fact, allowing him to impersonate the being he once was.

"Why have you spared me?"

He is silent, standing stoically staring into the void of space.
I feel his will penetrating my mind, his thoughts merging with mine. Such dark thoughts of self-preservation, power and longing. This is not the way of my people, I do not want these thoughts. I try to repel them, but I can't resist them. His will is too strong and I am too weak.
The hunger. I feel an intense and insatiable hunger, an emptiness that needs to be quenched. His desire is all-consuming, there is nothing in the galaxy but death to feed my... my master.

I bow my head. There is nothing I can do. I can't fight it, I can't resist. I reach up and pull off my veil, exposing my wounds. My dark, short hair, drenched in sweat, falls down and hugs my jaw. I want to weep, but I bury my agony deep down and look up.

This is what he wants. He wants my people, at last, to see.

I see it, not the void of space. I see Katarr. I see oblivion and I see what I must do.

"My life for yours."