The Orange Mastery Datacron increases your aptitude in combat, allowing you to do more damage. It will grant you Mastery +3 to your permanent stats along with codex: Galactic History 39: The Third Great Schism. There are 5 Datacrons in total located on the planet of Tatooine.

This Datacron is located on a rooftop in Mos Ila. This is a fairly difficult jumping puzzle, so if you want the easier option, get it on a Republic Character in Anchorhead. You can collect this Datacron on either Republic and Empire Side as it counts towards the same achievement.
Start by climbing the rocks and get around the corner of the house. 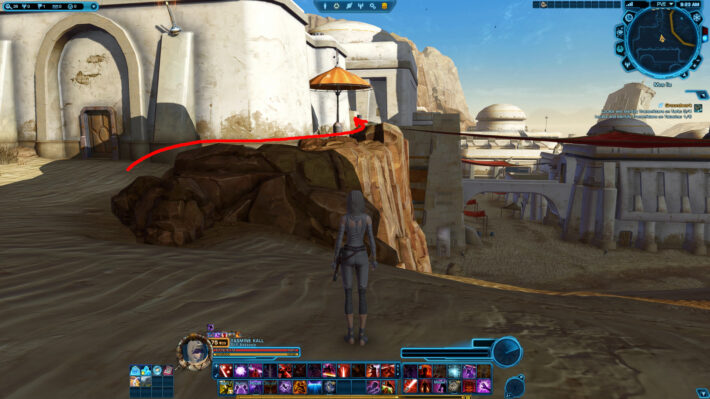 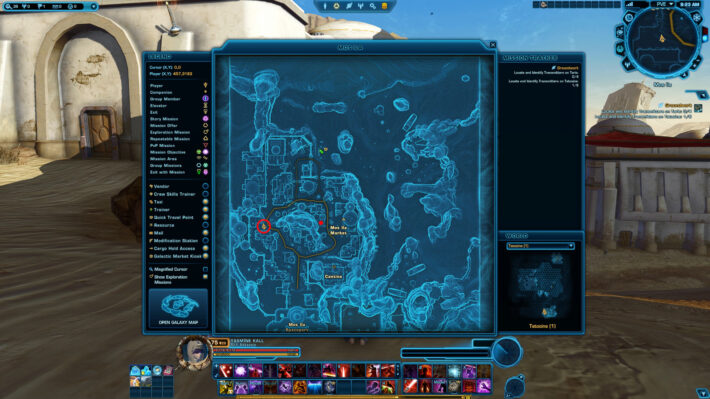 At the corner, jump up on the high point to the left, so you can jump onto the anchor holding the canopy to the right. 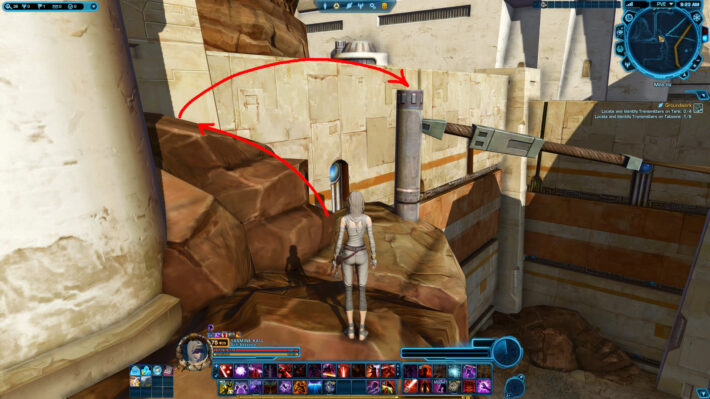 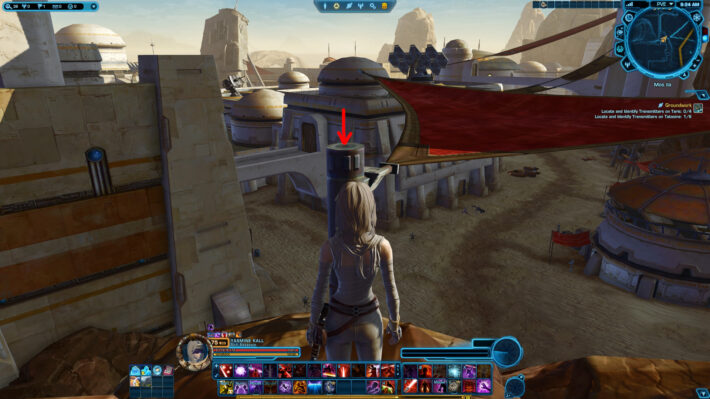 Follow the canopy to the end to reach the rooftop on the left side. 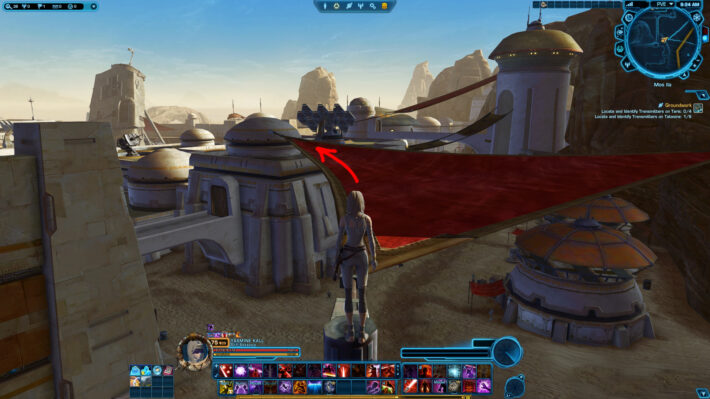 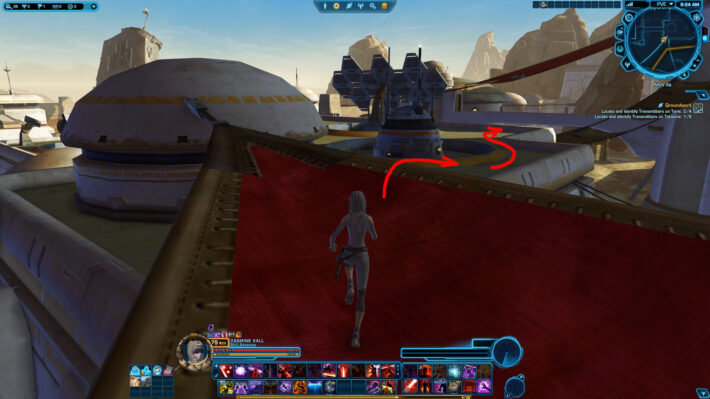 You will now be met by two possible paths. The first path, get to the edge of the roof on the right side where another, but different kind of canopy is anchored. Jump onto the tether and follow it all the way up to the other end. Stay on the left side and be careful. The tethers are very slim. 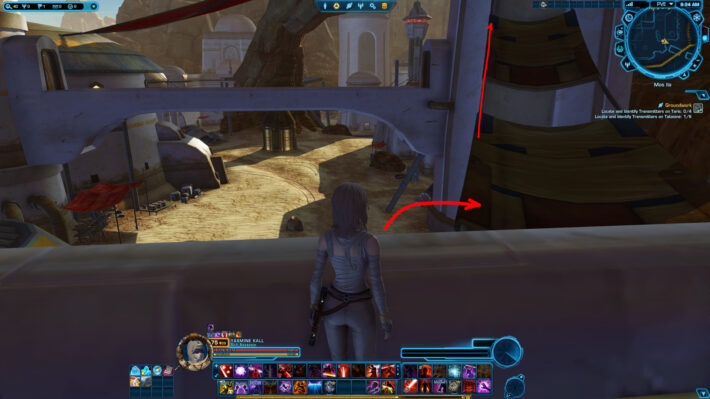 At the top you should get on a mount and jump to the bend pipe below. This jump is farther than it looks, but if you have unlocked Speeder Level V you might be able to reach the walkway and won't have to bother with the pipe. I recommend using a small mount for this. 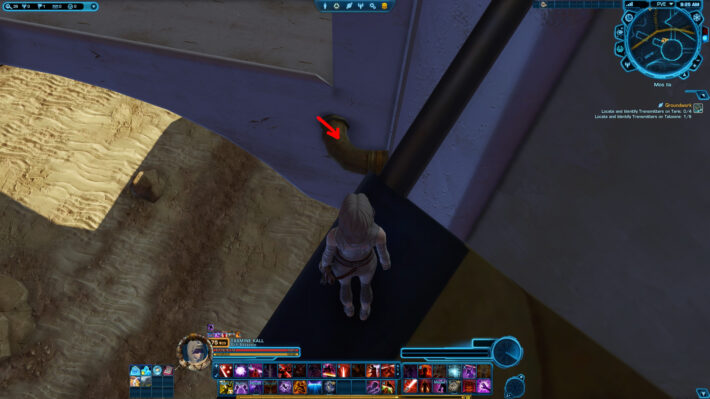 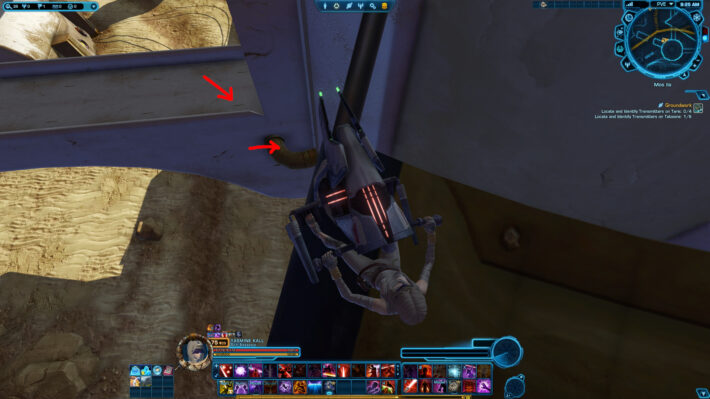 From the pipe simply jump up onto the walkway. (If you succeeded, skip the next 6 images) 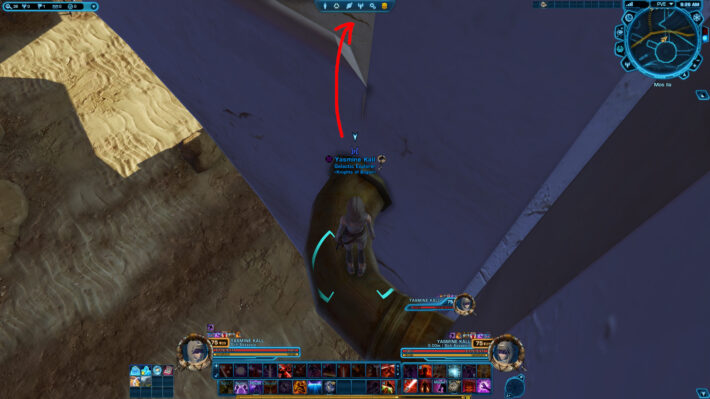 If you weren't able to make the jump, the second path is longer and be easier for most, but there will still be some tricky jumps. Instead of jumping down onto the canopy, you'll follow the rooftop to the left. 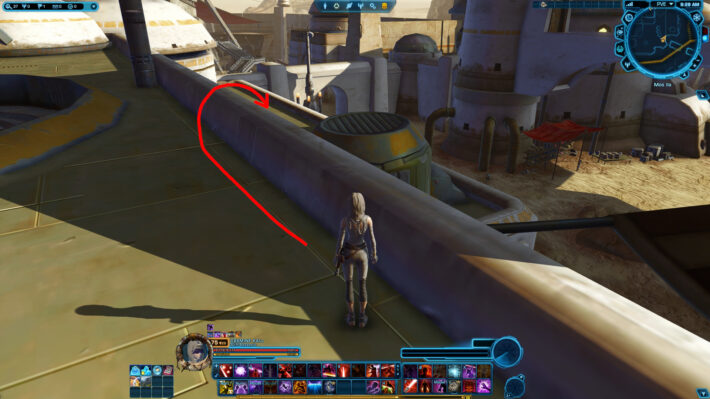 Jump down to the next rooftop and follow the further north. Turn right on the wall at the end of the rooftop.

Get to the end of the wall and turn right again. 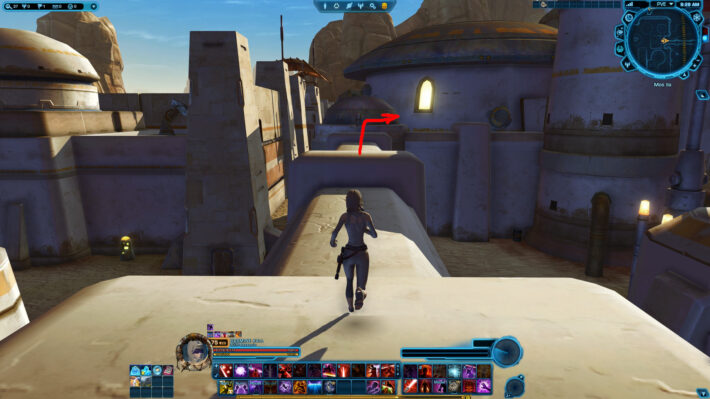 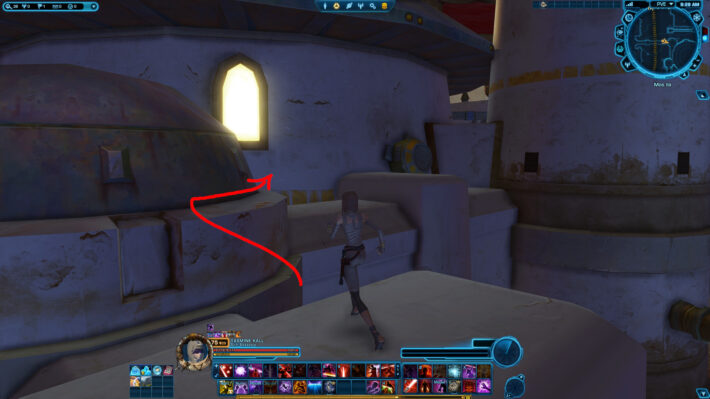 Use a mount to jump onto the wall mounted generator thingy, then jump again to the small wall between the house and tower. 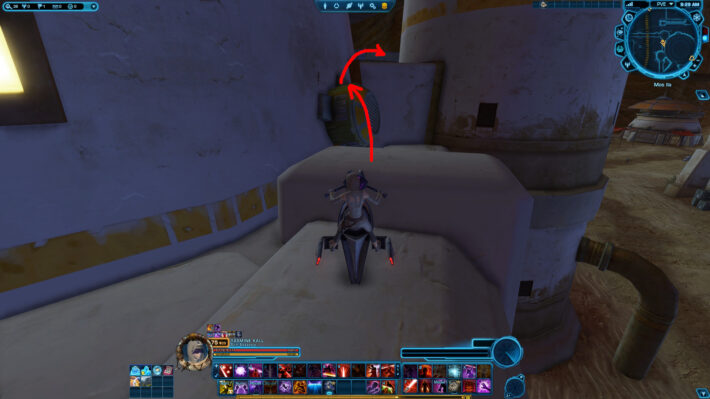 From the small wall you have to jump to the beam directly in front of you. 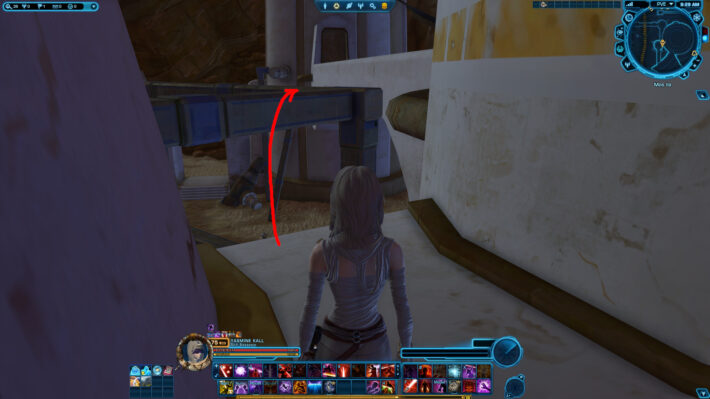 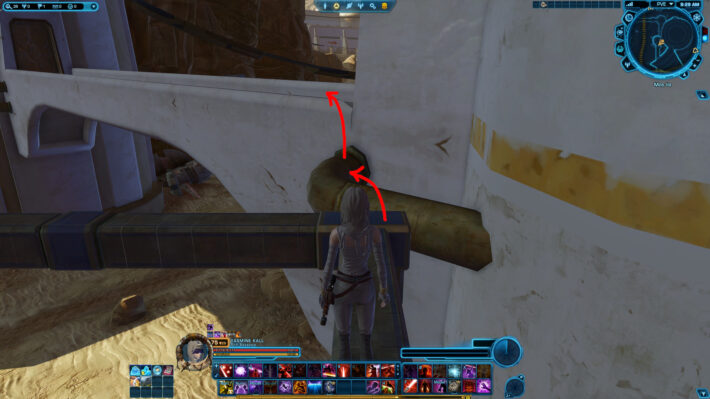 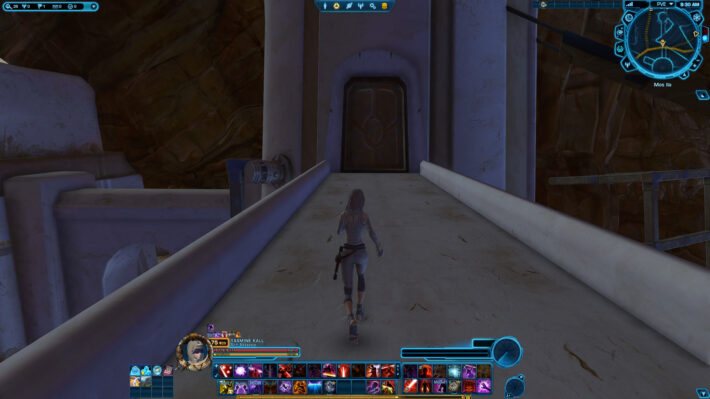 At the end of the walkway, whether you took the short or the long path, you have to jump onto the bend pipe on the left side.
Pro tip: If you target yourself by clicking your portrait picture, you will get a circle underneath your own character. This is an indicator of how much space to take up on the ground, which will be extremely helpful on jumps and narrow paths. 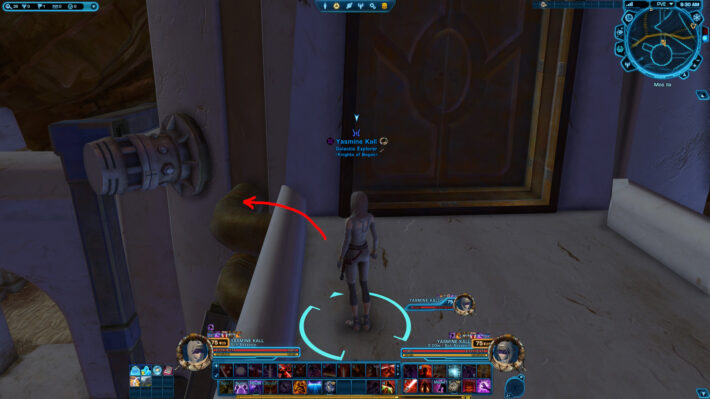 From the pipe jump to the wall mounted cylinder thingy. 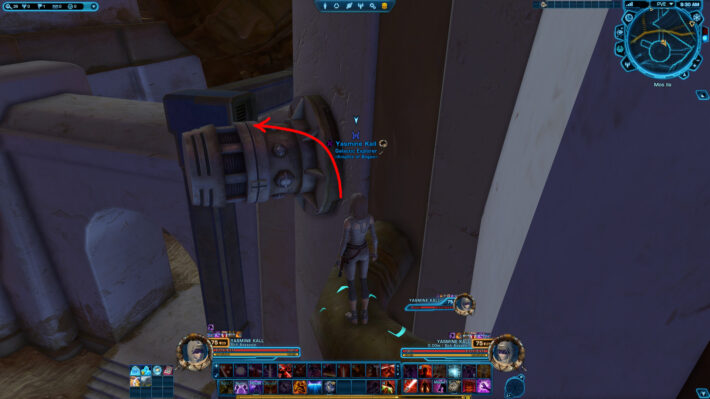 From this cylinder thingy, jump to the beam. Be careful, it's easy to overshoot the jump. 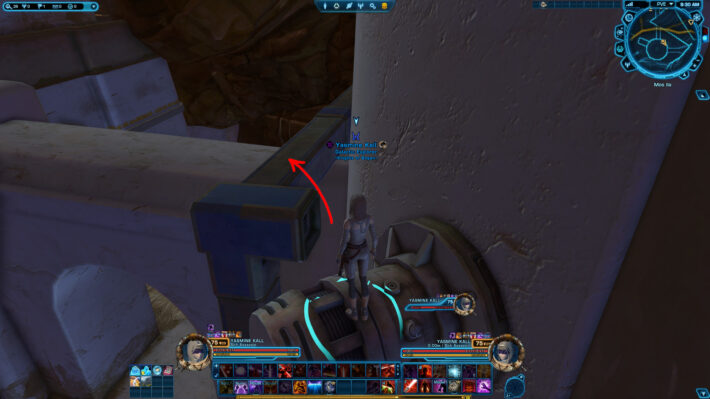 From the beam, jump onto the wall below and continue up past the outer wall of the building to the left side. 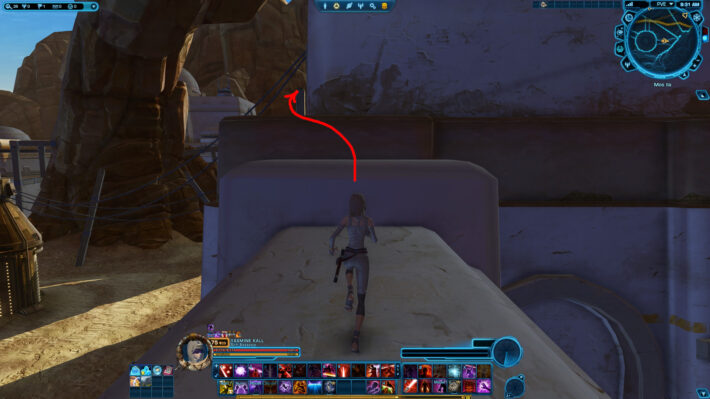 Turn right at the corner of the house and continue your path, stay close to the wall to your right. 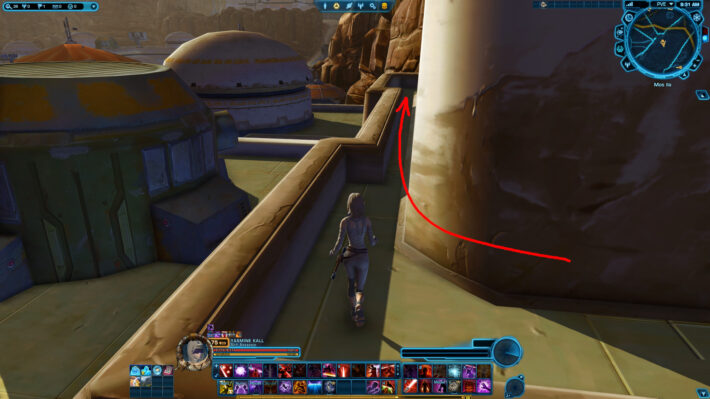 At the end, jump down on top of a wall below. 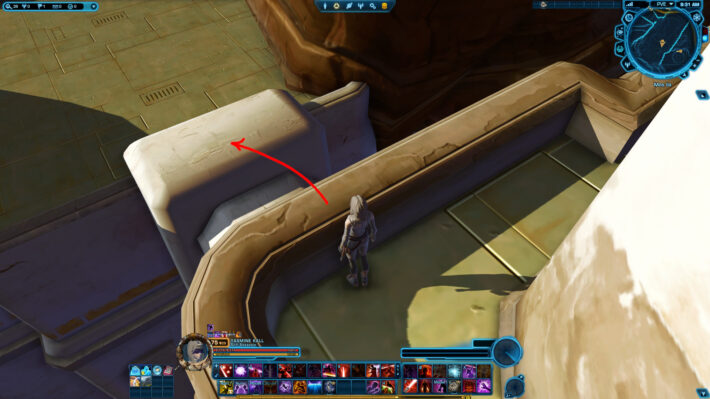 Cross the rooftop straight ahead to the opposite side and jump off to the next rooftop where the Datacron is located. 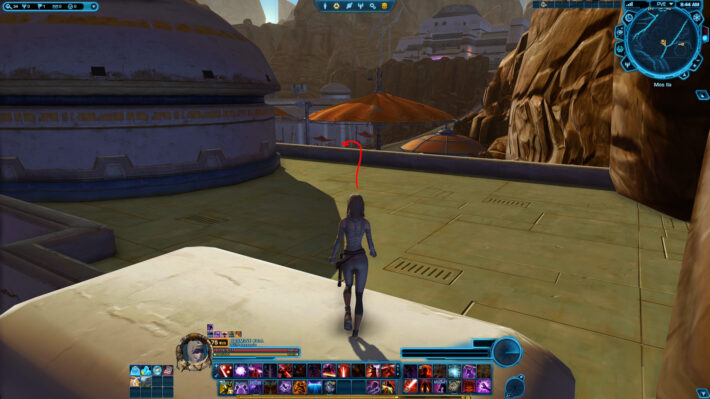 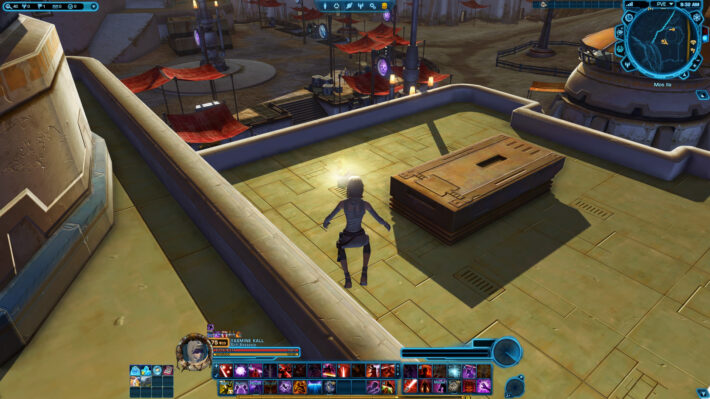 This will grant you Mastery +3 to your permanent stats along with codex: Galactic History 39: The Third Great Schism. 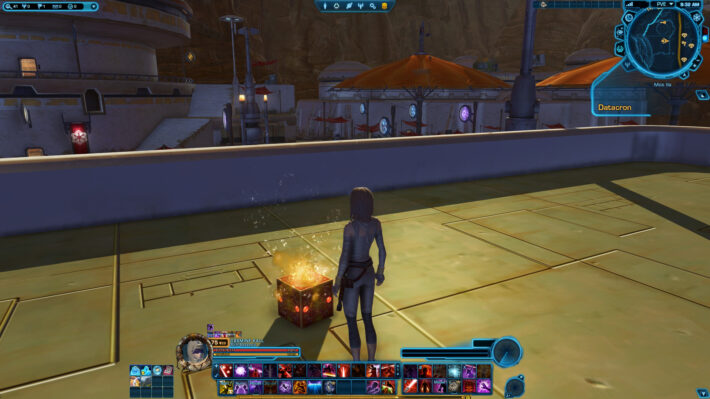