The complete and ultimate guide on how to navigate and earn all the prizes at Nar Shaddaa's luscious Casinos in during the annual Nightlife Event in Star Wars: The Old Republic. 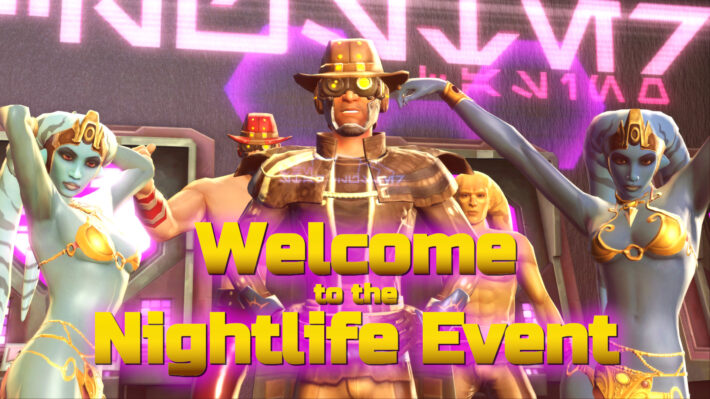 How to get started.

You can pick up the first time mission at the Advertisement Terminals on the Fleet that will tell you about the best Casino in the Galaxy is on Nar Shaddaa, called Star Cluster (Imperial) and Club Vertica (Republic). 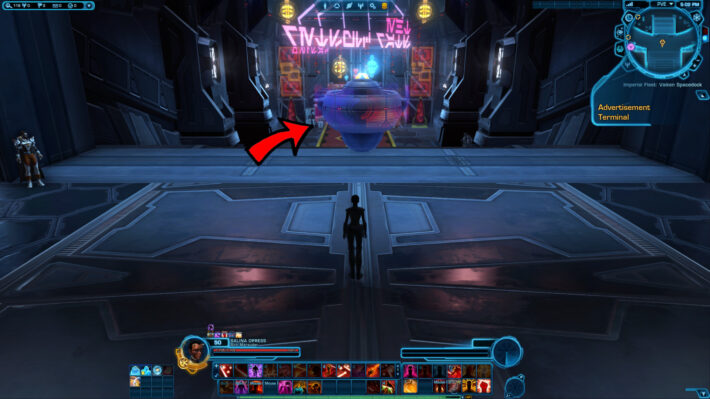 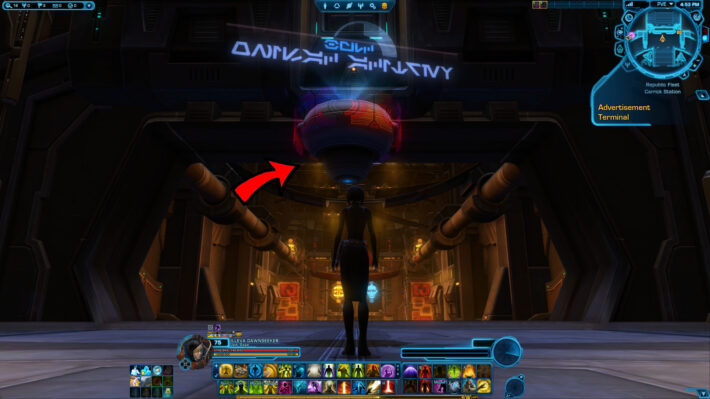 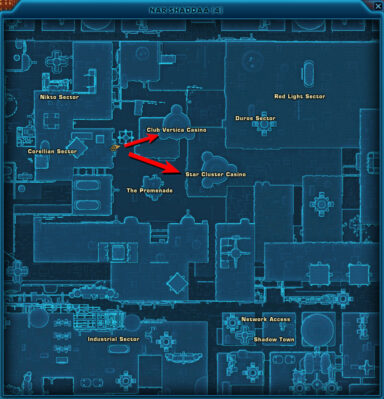 Travel to Nar Shaddaa and take a taxi to your faction's Casino near the Promenade and get on gambling! 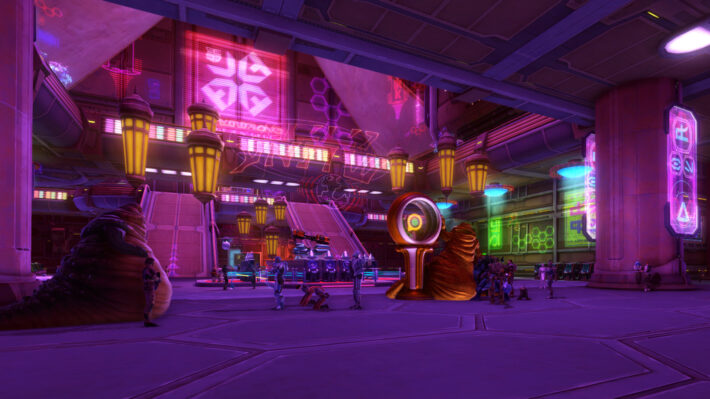 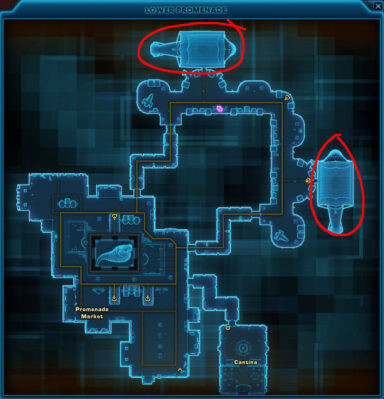 If you prefer a more spacious environment to test out your luck, you can also make use of the gambling machines on the Pleasure Skiffs on the Lower Promenade on Nar Shaddaa.

This location has more room, but lacks the Emperor's Grace Machine. 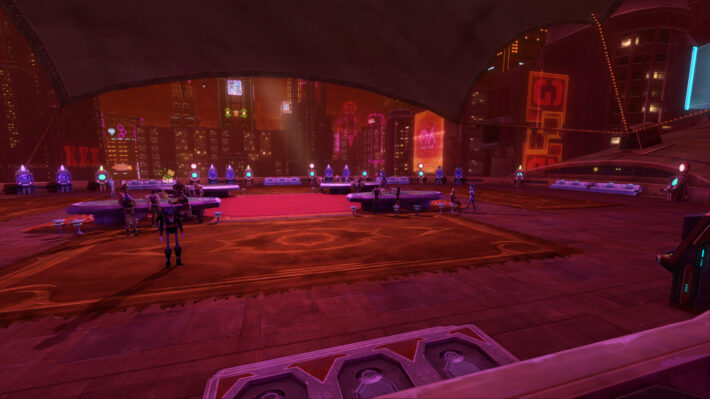 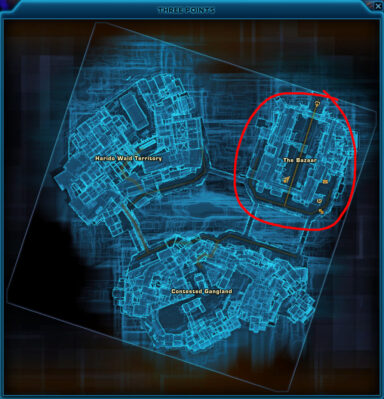 And for a change of scenery, you can also travel to The Bazaar on Mek-Sha.

This location is less crowded, but it also doesn't have the Emperor's Grace Machine. 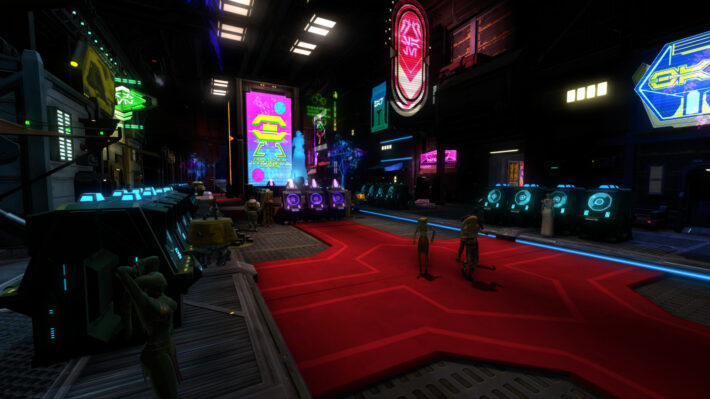 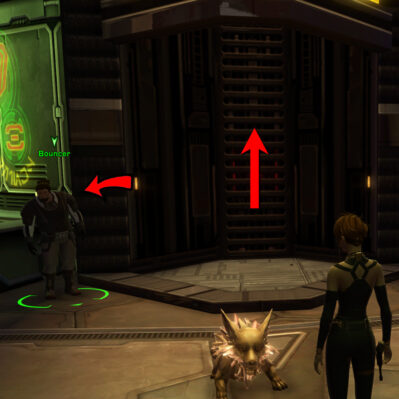 And for those who wants to feel exclusive, you can now also gamble away in the VIP Lounge of both Carrick Station and Vaikan Spacedock.

To gain access to the exclusive area, you will need a VIP Lounge Wristband. This wristband can be purchased at the Bartender Droid next to the VIP elevator.

You will be kicked out by the Bouncer, if you cannot prove you belong. 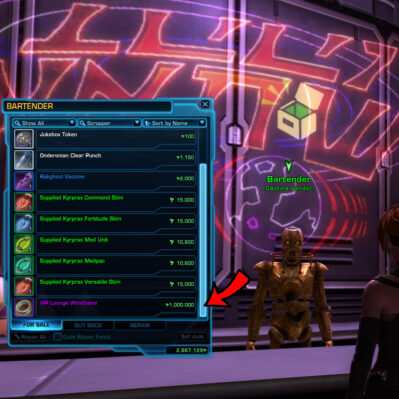 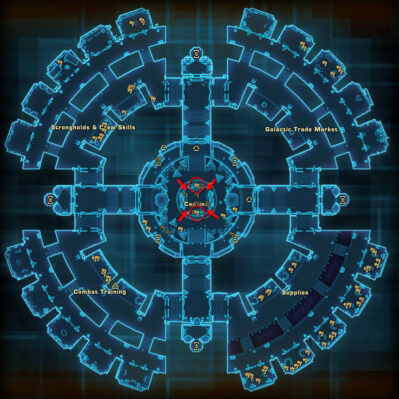 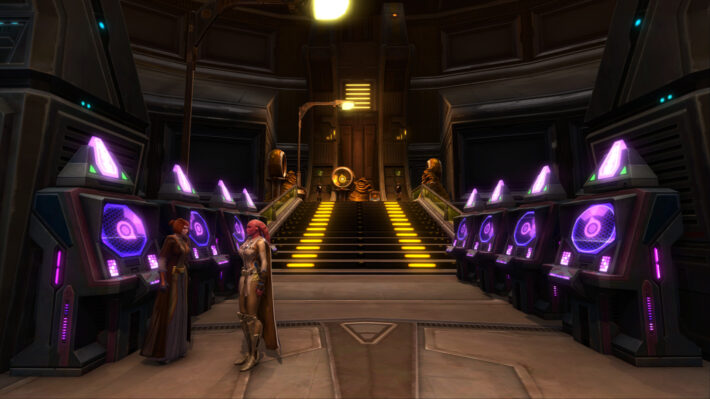 How to get tokens.

You can buy tokens at the Hospitality Droids scattered around at the Casino, the Skiffs and Bazaar. 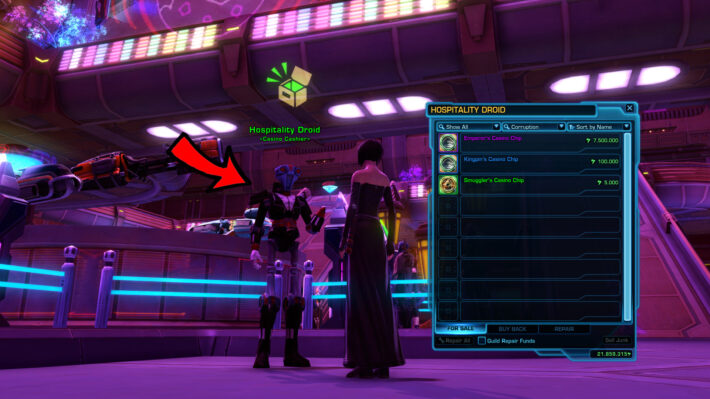 The VIP Lounge also have special VIP Hospitality Droids that sells the newly added Max Bet Chips. These chips can only be used on the Max Bet Machines located in the Lounge, but gives a higher win rate. 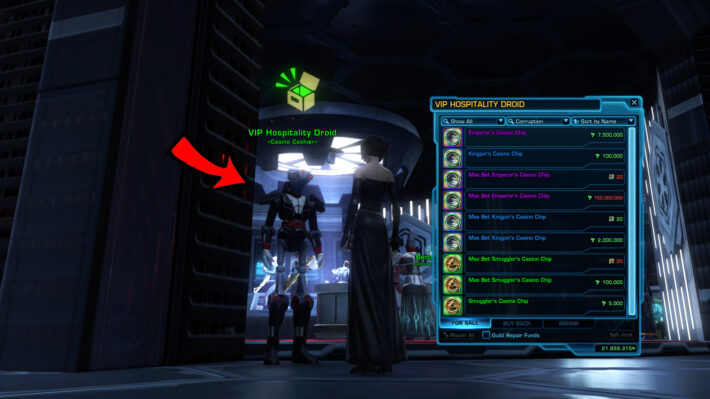 You can also earn a few Smuggler's Casino Chips from the [Daily Mission] by interacting with the Advertisement Terminal at the Casino. 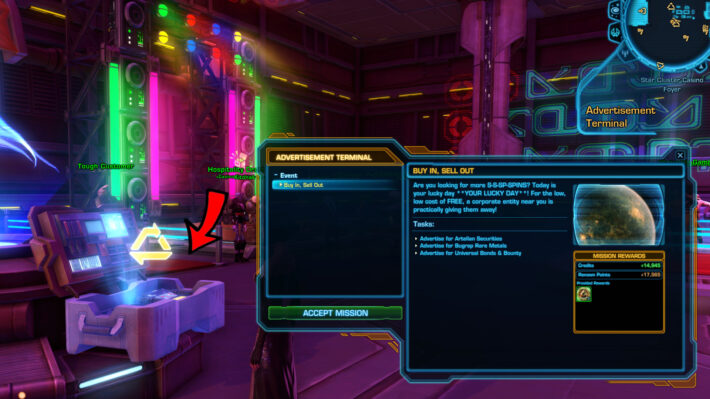 As well as you can earn a few Kingpin's Casino Chips from the [Daily Missions] given by the NPC Pit Boss Yan Pengu (Empire) and Revehnimaal (Republic) at the Casino. 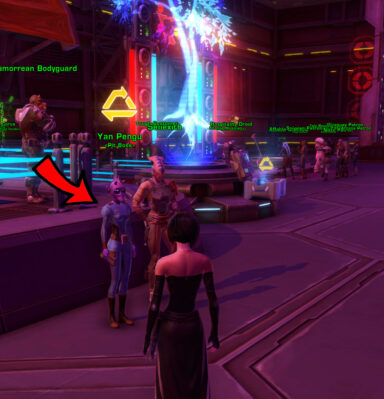 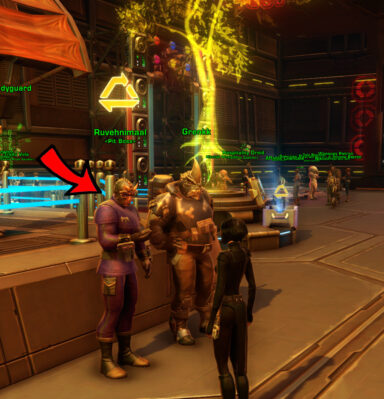 You will also earn of Chips - both Smuggler, Kingpin and Emperor's Grace - as random drops from killing enemies across the Galaxy. 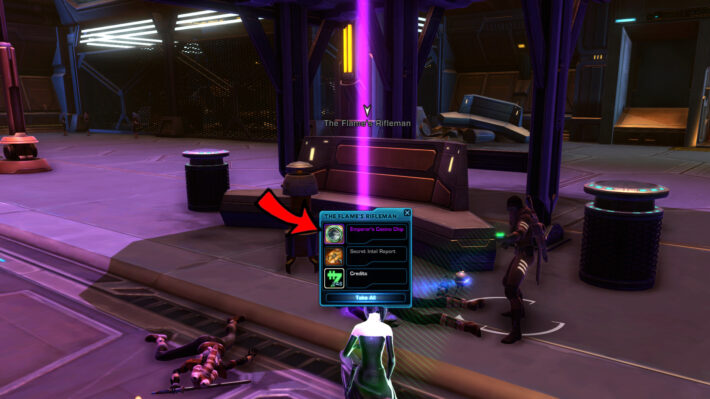 How to gamble most efficient

What you want to do is to start at the Smuggler's Luck Machines (Green machines) until you get a buff called "Feeling Lucky" which will last for 2 min. Be aware that many players will optimise by occupying two machines. 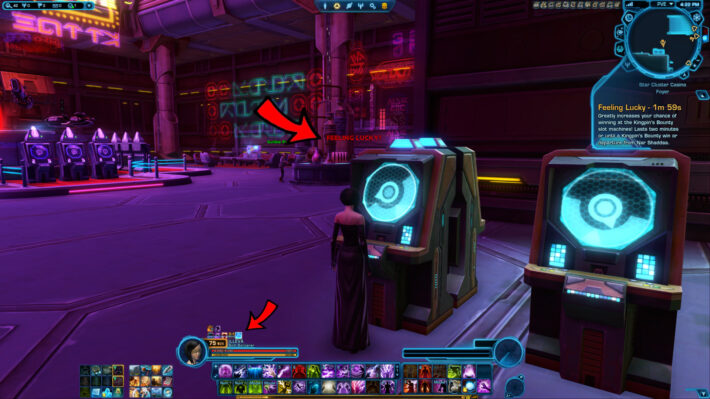 While you have the  "Feeling Lucky" buff, you move onto the Kingpin's Bounty (Purple machines). 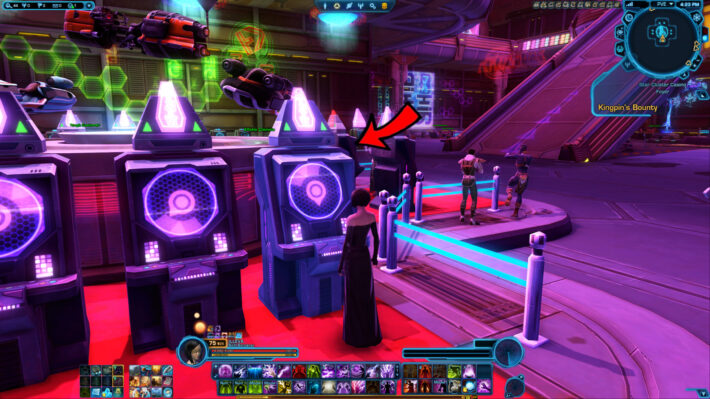 Or go straight to the Emperor's Grace Machine (Big and gold).
Note: There are only 3 of these machines at the Casino, so be prepared to stand in queue once in a while. Be nice. 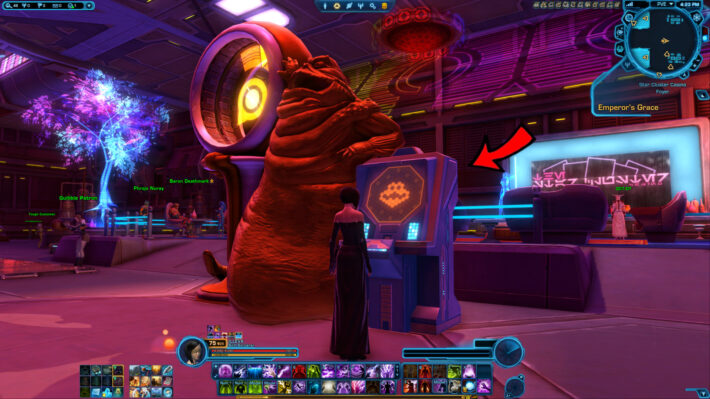 Once you have won a prize or the buff runs out, you will lose your buff and you repeat the process.