The Endurance Datacron increases the amount of damage you can suffer by increasing your max health. It will grant you Endurance +4 to your permanent stats along with codex: Galactic History 64: The Kanz Disorders. There are 5 Datacrons in total located on the planet of Hoth.

This Datacron is located on the second level of the surface of the derelict Star of Coruscant in the Starship Graveyard.You will start in the Jedi Encampment [Heroic Area], so if you want to avoid fighting then come on a Republic character.
There are two ways to begin this jumping puzzle. One is shorter, but tougher, the other longer, but easier. (If you struggle with the tough jumping, skip the next 5 images) 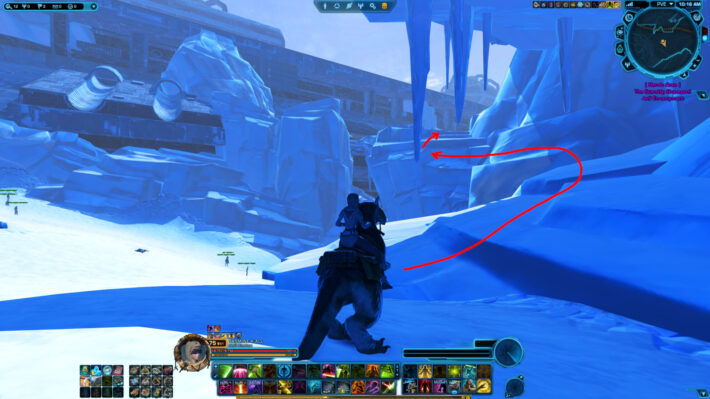 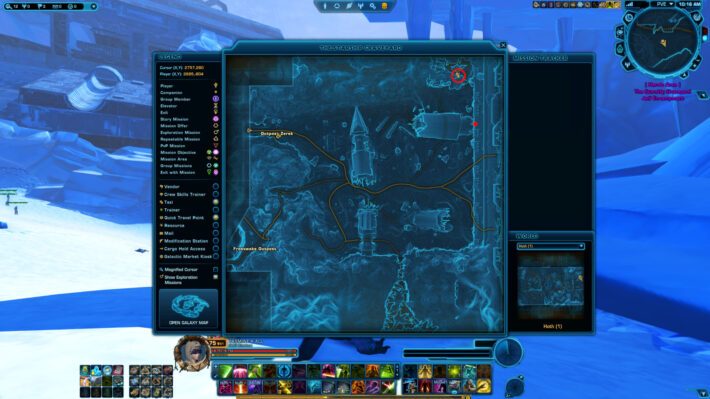 Start by climbing the ice blocks directly to your left as you enter the Heroic Area, but start with facing towards the wreckage. 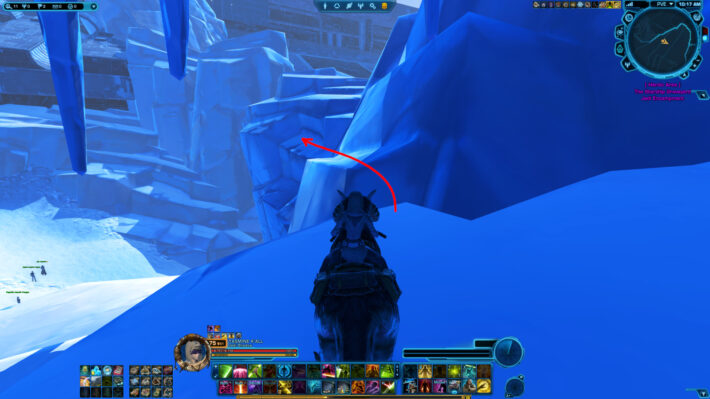 Shimmy along the edge of the ice block on its left side. You have to jump onto the corner edge, as seen on the image. This is the tough jump to make. 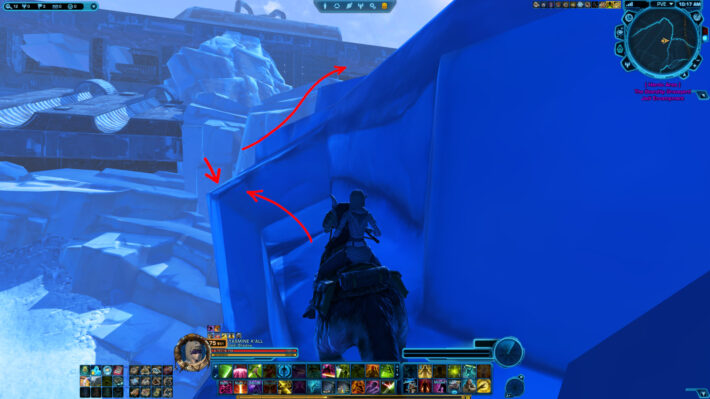 From there, move on top of the ice to your right and towards the wreckage until your reach the pointy edge. 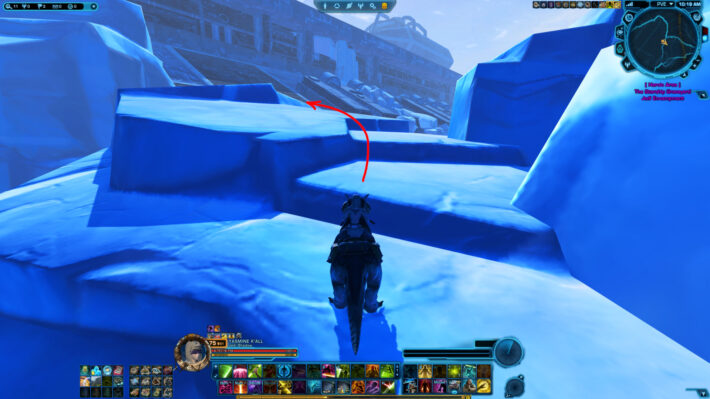 If you struggled with this jump, go for the longer and easier path (if you took the short path, skip the next 6 images), which is further to the west in the Heroic Area: 2604, -865 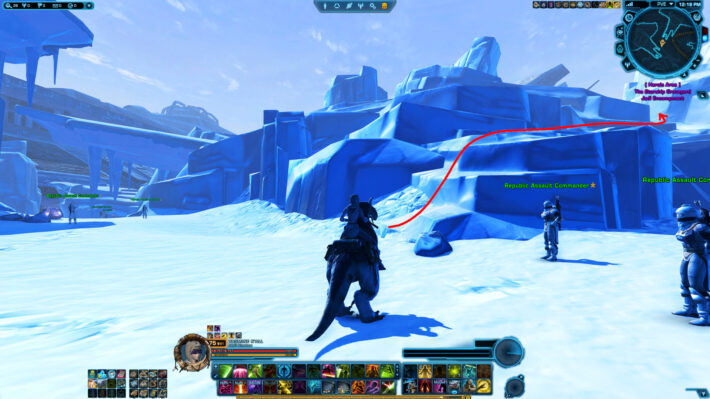 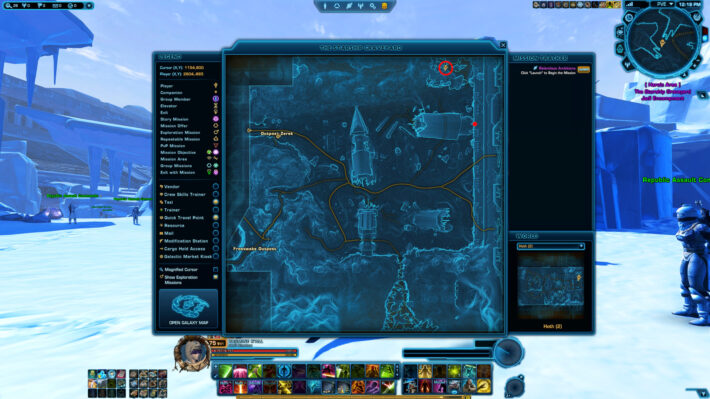 Climb the ice blocks at the corner and follow it to the back on the right side until you reach a patch of snow. 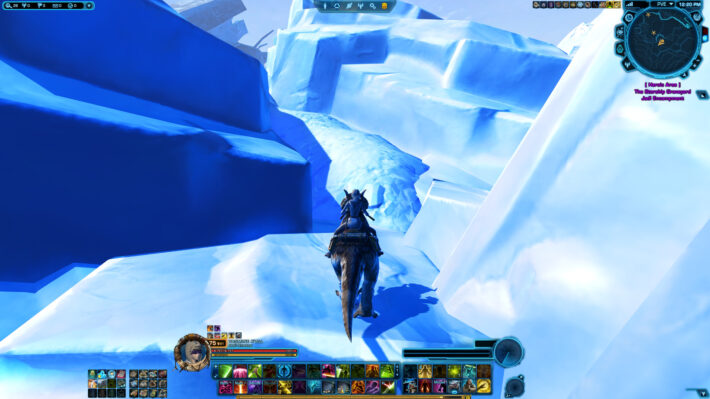 From the snowy patch, climb onto the ice on your left side all the way to the top towards the wreckage. 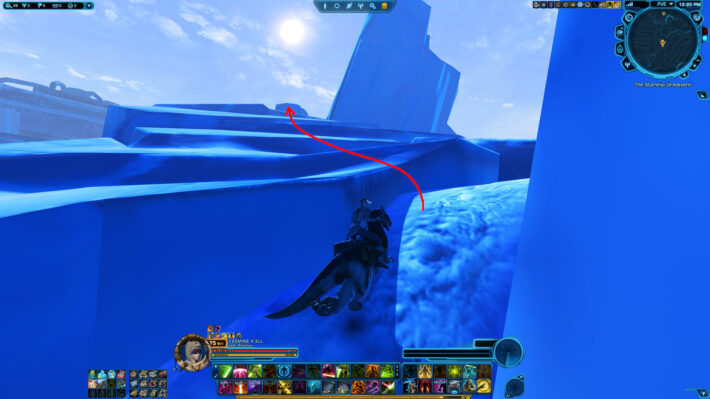 When you've reached the edge, jump down to the plateau below. 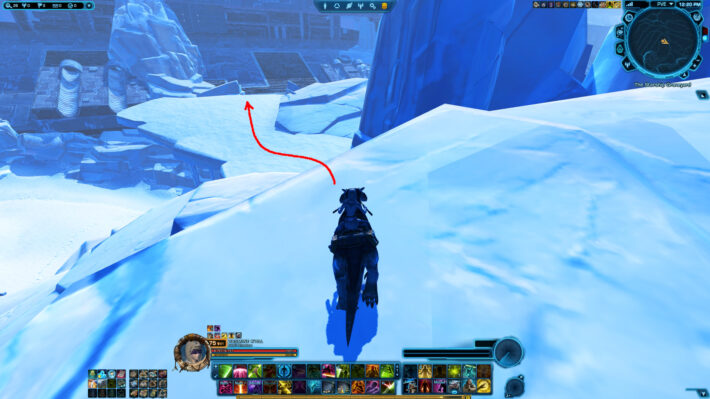 From this plateau, jump down to the next section. You have now reached the same position as the shorter path has. 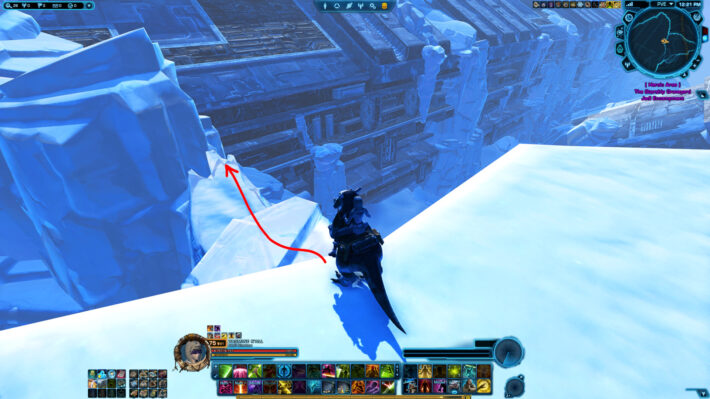 From the pointy edge facing the wrecked ship, jump down onto the ice formation attached to the wreck below and turn right. 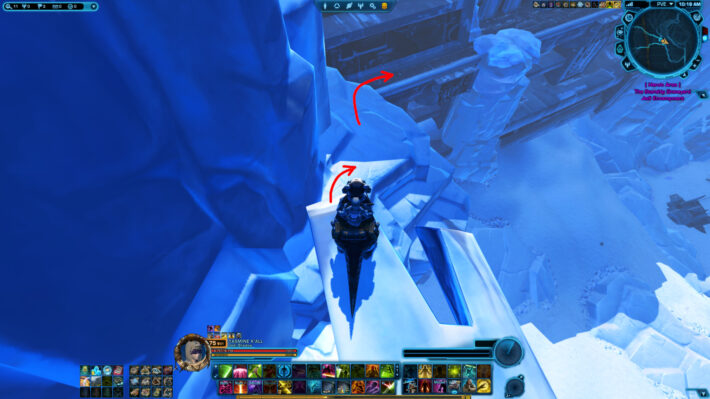 Follow the edge for as long as it allows you. 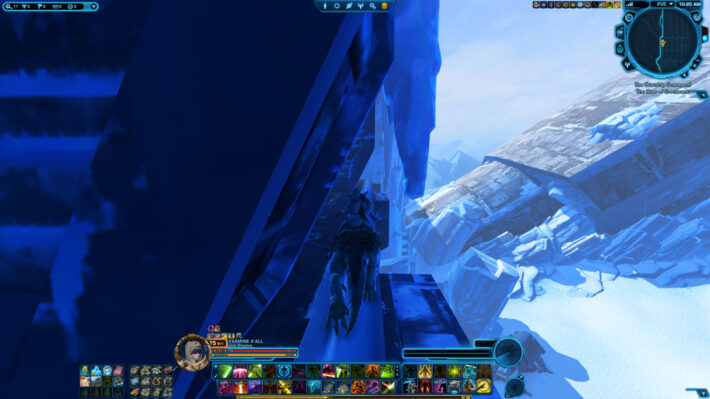 At the end, jump down onto the ice below. I recommend getting off your mount, so you don't overshoot the jump and have to start all over again. 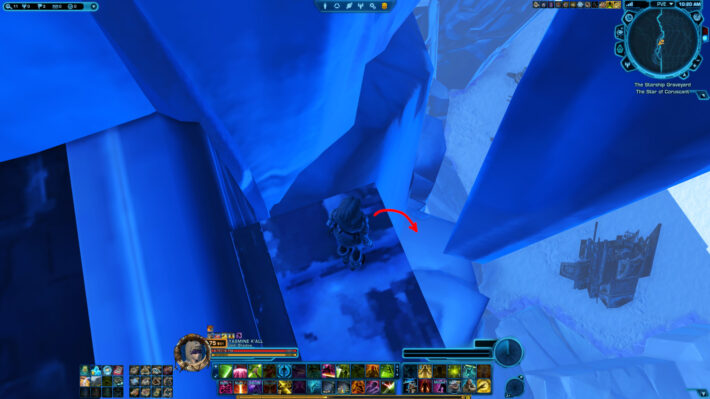 Now climb the ice formation to the top. 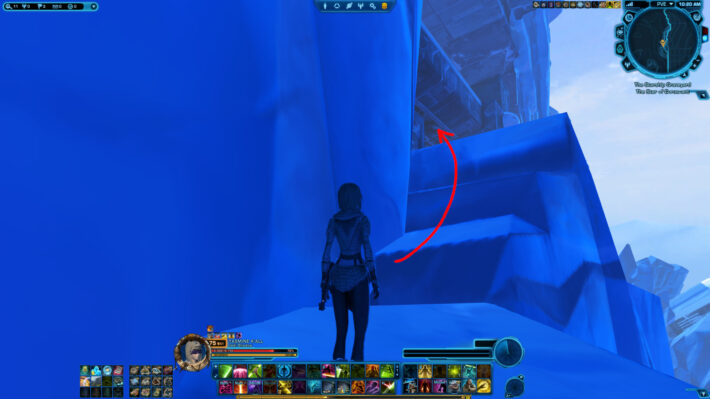 Continue following the edge of the wreck until you reach the ice. 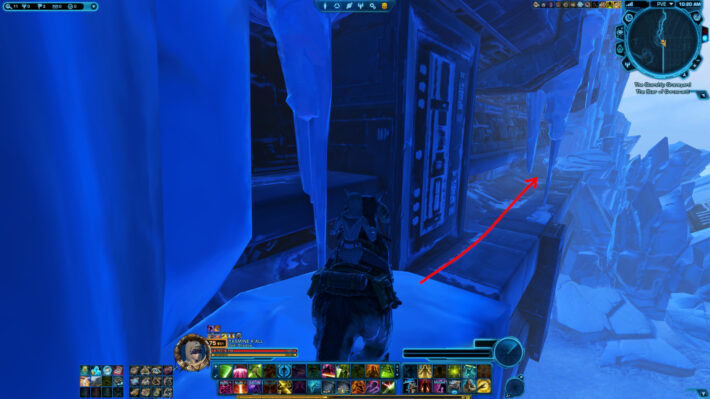 Climb this ice formation, staying close to the wall on your left side, until you reach the next section of the wreckage. 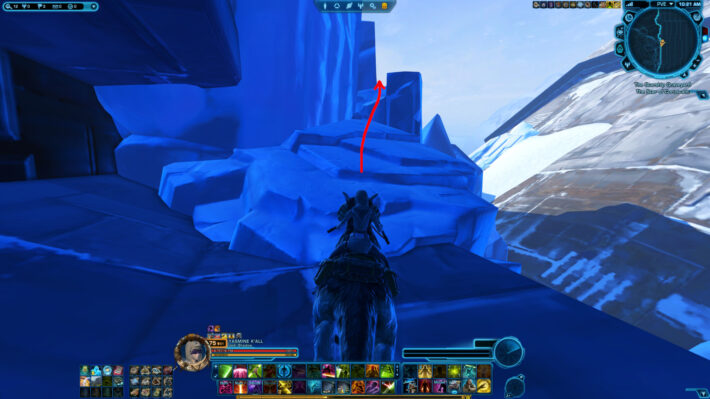 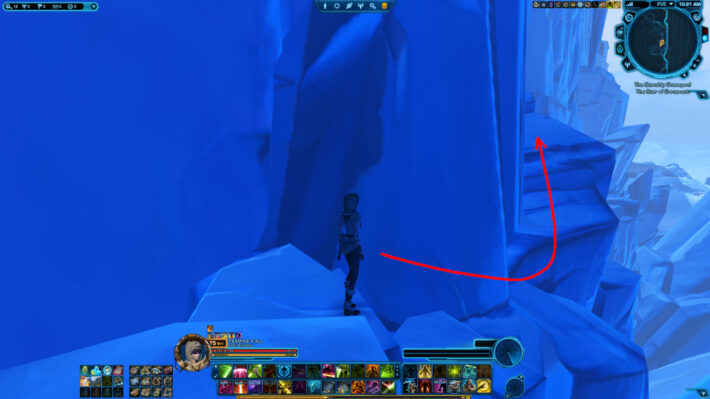 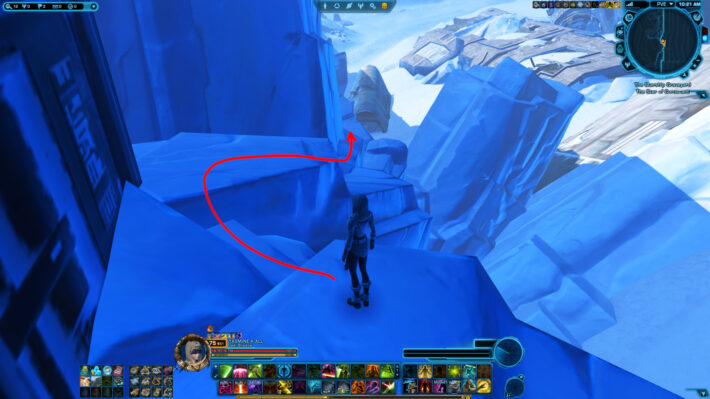 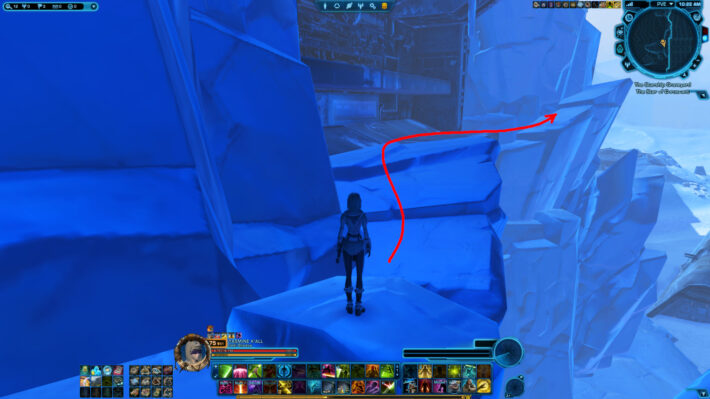 Cross the small section to the next bit of ice and climb it yet again. 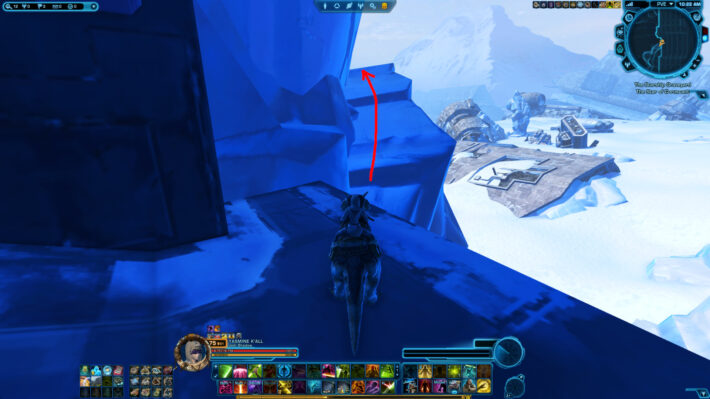 Stay to your left and keep climbing until you reach the second level of the ship wreckage that now leads the other way. 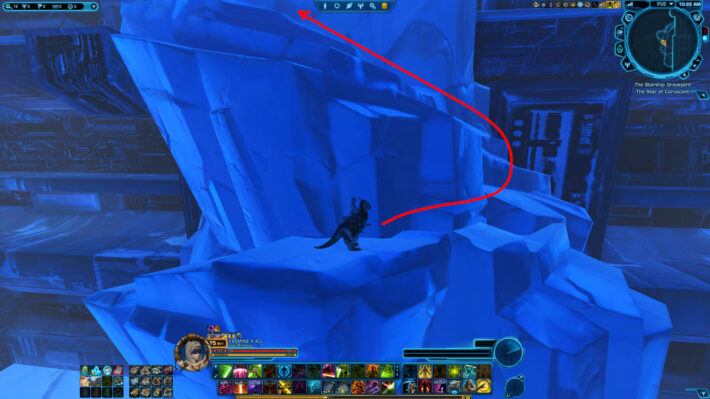 Follow the edge of this level until you reach another ice formation in your way. 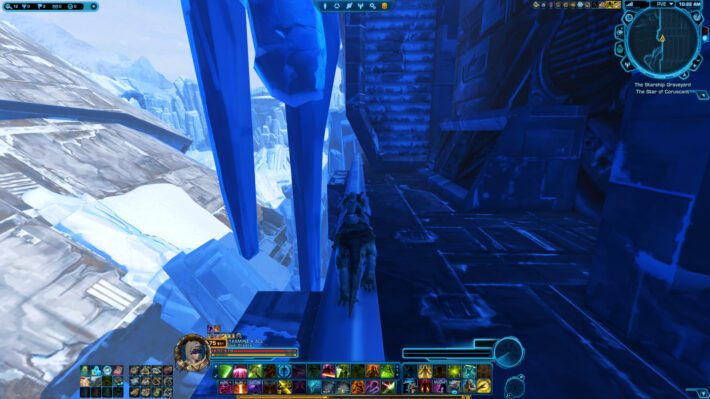 Climb it by using a mount, but beware. This is a long drop if you make a mistake, so take it slow. Your Datacron is located just behind this climb. 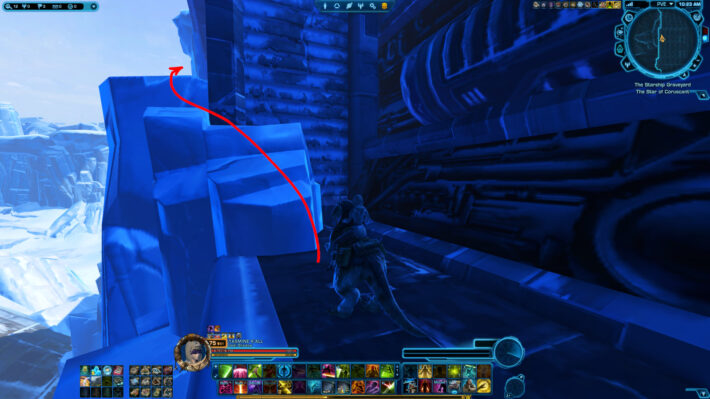 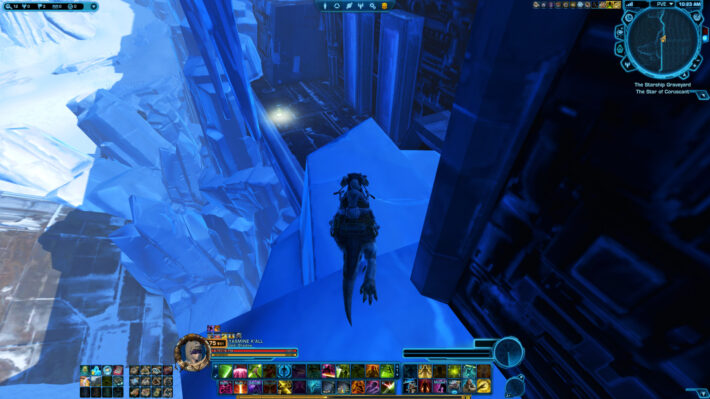 This will grant you Endurance +4 to your permanent stats along with the codex: Galactic History 64: The Kanz Disorders. 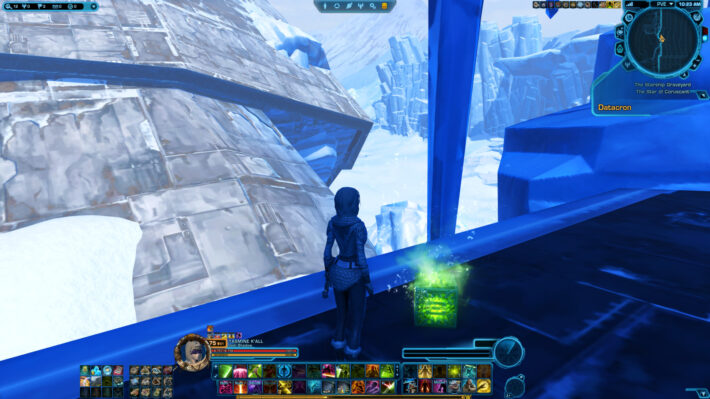